Tasting What You See

Taste, similar to our other four senses learned about in this class, is very complex and can be influenced by many different things. One thing that influences taste that I find the most interesting is our sight. How a food looks has a great impact on its flavor and how flavorful you think the food is. Neurophysiological research has shown that the groups of cells that are activated with respect to taste also activate when you look at food or drinks.

“See What I’m Saying” goes through an example of how you truly taste what you see. If you were given juices in their natural state with their natural colors, it would be fairly simple for you to determine the flavor of each juice. On the other hand, if the juices were all clear, you would have a significantly more difficult time determining which drink was which. Additionally, if a certain drink with a known color, such as red cranberry juice, was somehow made purple, this would also negatively affect your ability to correctly determine the flavor of the juice. Scientific American gives another example experiment on how you can test that you really taste what you see. The directions instructed you to have 3 cups of apple juice but dye each of the cups a different color with food coloring. Find participants and ask them to take a sip of each of the drinks and take a sip of water in between drinking each of the drinks. Then, have the participants tell you which of the three drinks was their favorite. Scientific American stated that typically, a person will rate one of the juices as their favorite even though all of the juices are the same which means that color had a big impact on this decision.

I definitely do agree that we taste what we see. When I read this portion of the chapter, it reminded me of an activity I participated in during Girl Scouts when I was in elementary school. The troop leaders had blindfolded us, put a certain Kool-Aid flavor on a Q-tip, touched the Q-tip to our tongues and had us try to determine what flavor of Kool-Aid we were tasting. It was extremely hard for all of us to determine the flavor since we could not see the color. However, once we were able to see the color of the drink, there seemed to be no difficulty determining the flavor. 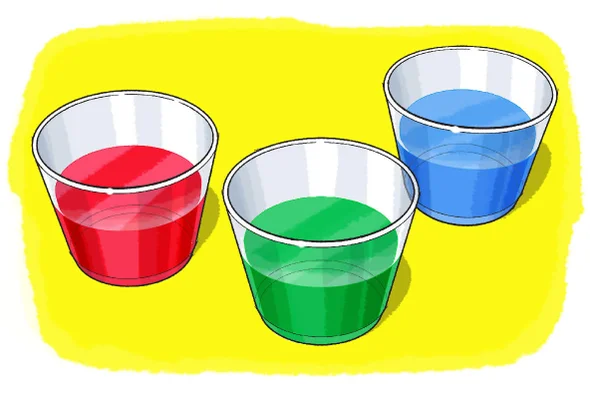