The tricks our minds and eyes play on us 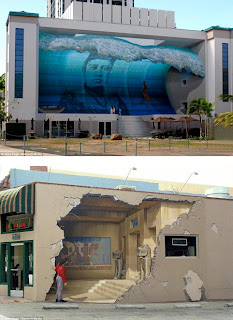 I have always been fascinated by optical illusions and how they work. I am not so much interested in the regular ones where circles that are standing still look like they're spinning, but rather famous works of art by artists such as Salvador Dali and M.C Escher that trick your brain and leave you staring at it for hours.
So what is an illusion? The official definition is an image or representation believed to be real in our mind's eye, but is not actually real. Because of the way our minds and eyes work together to allow us to see, we tend to see things that are not actually happening when looking at an optical illusion. When we see something and capture an image, it is upside down, needing to be interpreted by the brain. The retina- where light becomes focused and forms an image, also contains a blind spot. Any image that falls within that blind spot will be not be seen. However, the blind spot does contain optic nerves which transport the image to the brain. This blind spot can confuse nerve impulses that transport the image to the brain, causing an illusion. Also, an excessive exposure to a certain pattern of colors or shapes stimulates certain areas of the brain. An excessive exposure to a color of a certain brightness may tire the eyes, having the eyes perceive an object differently. There are several types of illusions, some distorting an image's size, color, or length. Scientists are not sure how all of them work quite yet, but they are fun regardless!
The following is a video of the works of art by Rob Gonsalves, who in my opinion does quite a good job with optical illusions:
http://www.youtube.com/watch?v=sGaC49tBiYo&feature=youtu.be
The picture in my blog is by artist John Puch, who has an amazing way of turning buildings into life size optical illusions.
If anyone is further interested in optical illusions, I would highly recommend the book Masters of Deception: Escher, Dali, & the Artists of Optical Illusion by Al Seckel and Douglas R. Hofstadter.
Posted by Lauren Z at 6:34 PM