When it comes to describing taste, it is generally described in 5 basic sensations: salty, sour, sweet, bitter, and umami. The process of taste begins with the tongue where receptors are stimulated by the taste. The surface of the tongue also contains papillae, which is the ridges caused by the presence of structures. Taste buds are contained on the papillae and there are about 10,000 taste buds. There are a number of cells that make up each bud and the tip of each one sticks out into a taste pore. Within each cell, one or more nerve fibers are associated with it. Below is an image showing where each sensation is tasted on the tongue by taste buds. 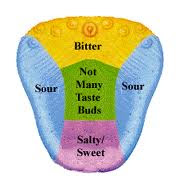 I always questioned why I can never taste any type of food when I'm really sick and congested. I found it interesting to read about flavor actually being combined with nasal and oral stimulation. The book used the demonstration to pinch your nostrils shut while drinking a type of juice or eating any type of food. They have come to the conclusion that you will experience tasteless liquids and food. This was fantastic for me to read about due to my Italian grandmother who cooks a lot. Whenever there is something that I do not like and unable to eat it, she becomes extremely insulted. So now I know to just try and pinch my nose shut and eat something I do not like!

What I also found interesting about the taste buds is that they change over time as you get older. As you become older, taste buds may start to decrease. Usually salty and sweet tastes are lost first, but bitter and sour tastes can last slightly longer. For the longest time I have always had it in my head that taste buds change regardless after every 7 years, but that's not entirely true. In addition, a decreased sense of taste can also be caused by smoking or can be related to diseases as well.
The following Youtube video further explains about the tongue and taste buds. Each person experience their own taste, which some taste buds are more sensitive than others. After watching this video, I am very glad that I am not a "supertaster".

Posted by Marlena Salerno at 9:49 PM