“Sensation and Perception”, by E. Bruce Goldstein, is an interesting and easy-read textbook containing information that each individual experiences every day of their lives. Not only will this book be helpful for students to have a better understanding in further psychology courses/Grad School, but also be personally intrigued with all the interesting scientific explanations of your very own sensations and perceptions. Throughout life, we have all questioned our perception of various stimuli we’ve came across before, especially when someone else companying you would perceive the same thing completely different from you. Sensation can be defined as the passive process of bringing information from the outside world into the body and to the brain. The process of sensing our environment is through taste, touch, sound, sight, and smell. Once this information is sent to our brains is when perception comes into play. Perception is the way we interpret these sensations to make sense of everything around us. When it comes to perception, an individual perceives different things about the same situation. Perceptions vary from person to person, and as stated before, one’s perspective can make something have a completely different meaning from somebody else.

An example of perception is reversible figures: 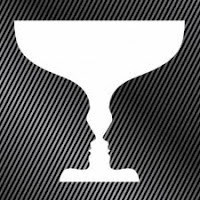 My mother and I both looked at this image together, but had a completely different perspective on what it was. The first thing I said was that there are two people looking at each other playing the staring contest until one breaks down and starts laughing. My mother, on the other hand, said that it was an empty vase waiting for some decorative flowers. Either perspective is correct and makes sense based on the image, but it is interesting how the same exact thing can be perceived completely different with another person. The Gestalt psychologists mentioned in the book helps explain many of these illusions when the image as a whole can be switched back and forth from being two faces to a vase. To make sense of this, an individual organizes their own incoming sensations into information which is meaningful to them. This concept is further explained in Goldstein’s book.

Another example of perception is motion perception: 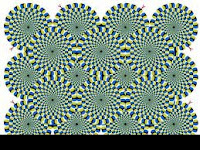 This optical illusion induces the perception of motion. While you look at this static image, your eyes will start playing tricks on you because it will appear to be moving due to the cognitive effects of interacting color contrasts and shape position.

Another interesting visual illusion is the Muller-Lyer Illusion:

This particular image is similar to the one shared in the book. The question is, which line is longer? The answer is that they are both identical length. Many people have mistaken the line on the left to be longer than the line on the right. The book explains this illusion on the basis of a mechanism called “misapplied size constancy scaling”.

There are so many different types of visual illusions shown throughout this book where I am unable to mention them all, but each one has an interesting explanation on how your sensory and perception system makes images like this an illusion.
The book also goes into depth about the structure of the eye and how it perceives things, which is interesting in itself. The structure of the eye are as followed: Cornea (transparent area that allows light to pass into the eye), lens (focuses light onto the retina), pupil (opening at the center of the iris, which controls the amount of light entering the eye. Dilates and constricts), Rods and Cones (approximately 120 million rods and 6.4 million cones). Rods are visual receptor cells that are important for night vision and peripheral vision. Cones are visual receptor cells that are important in daylight vision and color vision. When it comes to seeing color, there are only three types of cones that receive information about color. We have cones that pick up light waves for red, green, and blue. A couple interesting color theories that were also explained in the book was Trichromatic and Opponent-Process Theory. Goldstein’s book, “Sensation and Perception”, goes further on with other senses such as hearing (the importance of hair cells), touch (the understanding of how you feel vibrations and pain), taste (understanding of taste buds), and smell (functions of the olfactory system). All of these senses are what each individual lives by and depends on every single day of their lives. Some people may lack one of these senses, as in being deaf for example, and may depend on another sense even more like sight.

One sense that interests me the most is hearing. How does the ear work? What happens to human ears as you age? Due to my younger cousins capable of hearing pitches I’m unable to, is my hearing normal or damaged for my age? These were questions of mine that ran through my head as I started reading chapter eleven in “Sensation and Perception” by Goldstein.

A little anatomy of the ear: Sound waves cause the tympanic membrane (ear drum) to vibrate. Humans can hear sound waves with frequencies between 200 and 8,000 Hz. The three bones in the ear (malleus, incus, stapes) pass these vibrations on to the cochlea. The cochlea is a snail-shaped, fluid-filled structure in the inner ear. Inside the cochlea is another structure called the organ of Corti. Hair cells are located on the basilar membrane of the cochlea. The cilia (the hair) of the hair cells make contact with another membrane called the tectorial membrane. When the hair cells are excited by vibration, a nerve impulse is generated in the auditory nerve. These impulses are then sent to the brain.
Here is a Youtube video that helps explain a little of the ear:

Loud noises, infections, head injuries, brain damage, genetic diseases, and also just simply old age may cause people to lose some or all of their ability to hear.

Presbycusis affects males more than females, which is greatest at higher frequencies. Loudness is measured in decibels (dB) and this is the force of sound waves against the ear. The louder the sound, the more decibels. Noise-induced hearing loss occurs when loud noises cause degeneration of the hair cells. If somebody’s workplace consists of loud noises, it can damage their hair cells. The United States Occupational Safety and Health Agency (OSHA) has mandated that workers not be exposed to sound levels greater than 85 decibels for an eight hour work shift. Other sources of intense sound can cause hearing loss due to hair cell damage. Exposing yourself to leisure noise is a very common explanation to hearing loss. This includes loud music on an MP3 player, gun use, riding motorcycles, playing musical instruments, working with power tools, etc.

My ten year old cousin inspired me to pay special interest with the auditory system. She has introduced me to ultrasonic ringtones. In places where cell phones are forbidden, in class for example, kids have found ways to sneak the use of cell phones. Ultrasonic ringtones are perfect for signaling the arrival of a text message without being detected by older adults like the teacher of the class. This technology relies on the fact that most adults gradually lose the ability to hear high-pitched sounds. The cell phone ring tone that my cousin is using is called the “Mosquito”. Her ultrasonic ring tone has a frequency of 17 Hz, where usually only young children in her age group are able to hear. This was originally designed to help adults disperse young people loitering around them by leaving adults unaffected by the consistent cell phones going off. Of course children would take advantage of this invention, like my cousin, by fooling teachers and parents.
This Diagram shows different age groups hearing the text message ring tone measured in Hz.

My mother, my boyfriend, and I were testing these tones to see who can hear the best (I won). I was able to hear 15.8 Hz perfectly and just barely heard the next one down, which was 16.7 Hz. My mother was able to hear up to 14.9 Hz. My boyfriend, on the other hand, was only capable of just barely hearing 14.1 Hz. We have come to the realization that my boyfriend was active in the Marine Corps for 5 years being exposed by loud explosives. He was also part of the avionics department, which is fixing military helicopters. Now that he is out of active duty, he now works on a military base in New Jersey as a civilian still fixing military planes, jets, and helicopters. Every day at work he is exposed to very loud noises where ear plugs just barely help. This is a perfect example on the book explaining how different workplaces can severely damage your hair cells and in return give you difficulty with hearing. I told him in a few years he needs to start looking into hearing aids at the rate he’s going when it comes to his career.

The last little interesting fact about the ears is when you feel dizzy. If you were to spin around in circles, this causes fluid in the semicircular canal of your ear to move around. This in return stimulates the hair cells. When you stop spinning, the fluid still moves a bit. Due to the fluid still activating hair cells, your brain still gets a message that you are moving and you feel dizzy.

Here is a You Tube video of two men competing in a dizzy bat race at a baseball game. When they stopped spinning, they were extremely dizzy and all over the place. This is an example of losing your balance due to the fluid stimulating your hair cells.


In conclusion, this was one of the interesting classes to take. Studying about perceptions gives you a better understanding about yourself and what you are capable of doing and perceiving. After reading the book for this class, it makes you want to further your research on particular sections of information that has personally interested you. This information revolves around many real life situations and also answers questions each individual has asked at least once or twice in their life. I know it helped clarify certain situations and people in my life when it comes to the senses and how differently we may perceive things. This course, Perception, is highly recommended to take, especially for Psychology and even Biology majors.
Posted by Marlena Salerno at 6:15 AM