A neurological condition known as synesthesia causes automatic, involuntary sensations in a second sensory or cognitive channel in response to stimulation of a first sensory or cognitive pathway (for example, hearing) (such as vision). Simply explained, simultaneous activation of two unrelated senses occurs when one sense is active. For instance, this could happen when you hear music and experience the swirls or color patterns that go with it. Due of the ease with which connections between concepts can be made, synesthesia can improve cognitive skills like creativity and memory. Associative synesthesia, in which the senses are linked and associated in the mind, or projective synesthesia, in which the images and colors are projected into reality.

There could be up to 80 subtypes of synesthesia because it can involve any combination of senses. Though not all varieties of synesthesia have been examined or documented, the root reason is still unknown. Some synesthetes link shapes to flavors, hear sounds in response to smells, and perceive texture in response to sight. The multimodal mental imagery connected to synesthesia is frequently utilized by literature, film, and television (which explains the popularity of cooking and baking shows).

I found the subject of synesthesia to be very fascinating while reading Lawrence Rosenblum's book "See What I'm Saying." Despite not being a synesthete myself, I have always associated colors with numbers and days of the week. Although I don't often use these colors and it is more of an afterthought for me, persons with synesthesia encounter this kind of thing frequently. Richard E. Cytowic discusses the 1 in 90 people who experience synesthesia with graphemes—a condition in which they perceive written parts as saturated in color—in the video that is attached. The form that involves synesthesia with phonemes is the most intriguing. A synesthete may occasionally taste a particular flavor when they hear a word.

Here below shows an image of how one perceives the months via synesthesia: 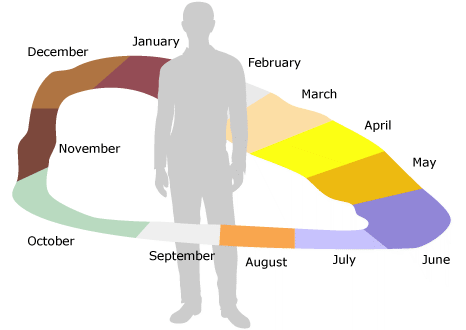