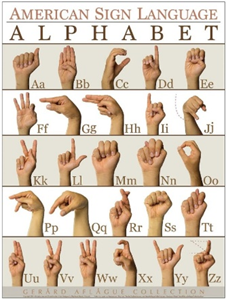 There are different forms of sign language based on culture, but one of the most popular is the American Sign Language, also known as ASL. ASL is expressed by movements of the hands and face. It is the primary language of many North Americans who are deaf and hard of hearing and is used by some hearing people as well. People are still unsure of how this type of sign language started, but there have been some theories that it originated over two hundred years ago. There is no real evidence to back up this theory.

Studies have shown that many parents should consider learning sign language due to the fact that children will be able to speak through sign language before they are actually capable of using words. Their hand coordination develops before their use of words. This also helps the child learn expressions and communicate their emotions. Attached is an article I found regarding this study.

Posted by Kimberly Malouf at 9:47 AM