I have a thirteen year old dog named Teddy. Over the past year we noticed that he wasn't responding to when we would talk to him or he wouldn't react to sounds that usually would get him up. We realized due to his age and big floppy ears, he could hear very little. We say hes "almost-deaf". Teddy used to be able to hear someone peeling a banana several rooms away, but now it appears that he relies on his sense of smell much more. With his sense of hearing almost gone, the vet said he would probably start to rely on his nose a lot more. This is a little sad for us, but its also super convenient because he no longer hears the door bell or other dogs barking. In the section of the book where the professor tries to imitate a dog and follow scents using his nose made me think of my dog. I wondered if my dog's sense of smell is now heightened now that he can no longer hear well. Luckily he still is happy as can be and people commonly mistake him for a puppy in his energetic attitude and appearance. 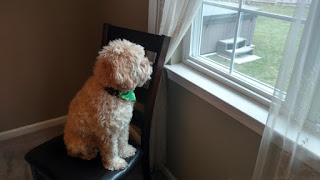 Teddy
Posted by Justin Chubb at 8:22 AM