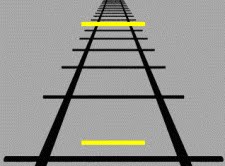 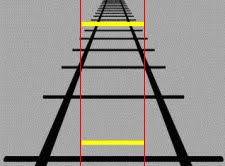 When things are further in the distance, they visually seem closer together. Take this train track, it seems as though the lines are closer together, but visually we assume that the tracks are just traveling further away while likely still staying parallel.

Now looking at the yellow lines in the left image, which one looks longer? Personally I had felt that the top line was much longer. However, this is just what the illusion perceives it to be. Looking at the image on the right, the red lines show that the lines are the exact same length. Our vision perceives the top yellow line to be longer due to the recession of the train tracks, creating the Ponzo illusion.

Posted by Ashley Eckart at 9:05 AM