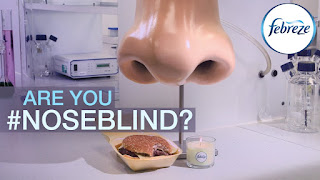 A while ago, Fabreze used to issue a multitude of comercials to promote thier products based on people becoming “nose blind.” In these commercials, people wouldnt clean thier rooms or cars due to the smell not affecting them in the way that thier peers would as they entered the area. These people were “nose blind” in that they did not dectet the room’s odors. These people did not actually lose thier sense of smell. They have just been so accumulated to the smell that it doesnt spark anything when they enter the room. Someone may smell the scent of a candle when they first lit it but overtime, the smell is harder to identify. The recognition threshold is the concetration needed to determine the quality of a certain smell. When exposed to a smell for a long time, it becomes harder to diferrenciate it as being good or bad. When a change occurs to the environment, the olfactory system senses the difference and cn alert the brain to the new smell. Being in some place for a long time without change, can cause the nose to adjust and not spark any new sense of smell hense why it may appear to be “blind.”
Posted by Allie Desmond at 4:31 PM