Change detection in relation to perception

Earlier this semester, I participated in various labs in relation to cognition and perception. In this finally blog post I will talk about change detection. The photo below shows results of about 49,700 participants who partook in a change detection study. They were all first shown various photos, "before" and "after" a possible change was made in the photo. Some trails had zero change in them.

Participants were shown trials under two conditions. The first was the "Flicker" condition, where there was a flicker in between the "before" and "after" photo. The second conditon was the "No flicker" condition, with no flicker in between the photos shown to the participants. They all had to click one of two buttons stating "yes there was a change" or "no there was no change" in reference to the two before and after photos presented to them. The number of correct answers were recorded and the results are shown below.

Basically, what this study shows is that people recognized a change detection better under the No Flicker condition (about 96% correct) versus the Flicker conditon (about 73% corect). This means that althought the flicker in between the photos was a very short time, it still deverted the indivual's attention of the overall scene in the photo presented. This is related to preception, of course, because we can get distracted in our day to day lives by only a second (or less than a second) of distraction (aka the "Flicker" effect), and if a change occured in our enviornment, we may not notice the visual change right off the bat. This relates to the one video we saw in class. 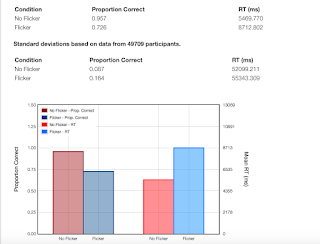