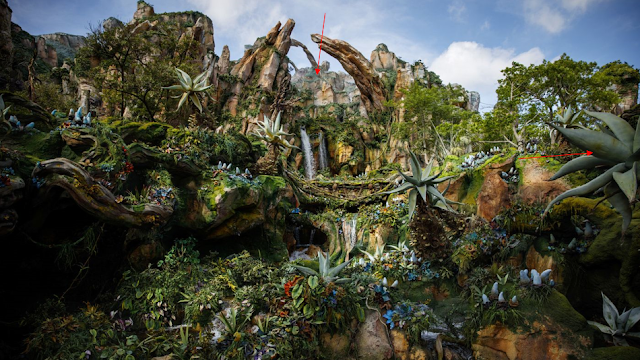 At Disney's Animal Kingdom Park a new land recently opened "Pandora." It is based off of James Cameron's movie Avatar. Inside the park it is a world of color and floating islands! Above is a picture from the queue line for their ride Passages of Flight. As you can see the object that looks closest to us is the plant on the right hand side, and the furthest away is in between the two archways. We know that the plant is the closest since it covers everything behind it, this is known as occlusion. Relative size also occurs which is where the arches in the back look smaller than the ones in front. Since this land is not from our world we can assume that the rock formations in the back are mountains and that they are rather large. Disney tries to achieve the atmospheric perspective by creating a slight haze of the objects further away to create the illusion that the mountains in the back are further away. In reality they are probably a few hundred feet away.