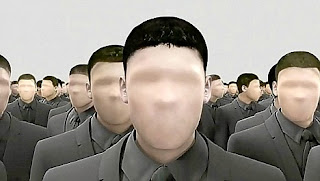 Prosopagnosia, which is known as face blindness, is a brain disorder characterized by the inability to recognize faces. Unlike most neurological disorders, prosopagnosia is not associated with memory loss, impaired vision, or learning disabilities. It is believed that this condition can be caused by a stroke or a traumatic brain injury, and to some degree is often present in children who have autism or Asperger's syndrome. People who suffer from prosopagnosia will have lots of trouble figuring out who is who, so they rely on other details that will help them figure out who a person is. For example, they will focus on the sound of their voice, style of clothing, and body language. A great movie to watch about a person who suffers from prosopagnosia is Faces in the Crowd starring the marvelous Milla Jovovich. In the movie, she plays a woman named Anna who, for the most part, is living a pretty good life. Then one night as she is walking home, she is assaulted by a random man, falls off of a bridge, and hits her head on something metal causing a traumatic brain injury. After recovering, Anna has to deal with not knowing exactly who is in front of them because she does not remember their face, and fearing that she may come into contact with her attacker and not even know it.

Click here to watch a trailer to "Faces in the Crowd."