Sight is a very interesting sense. As we learned in class, there are a lot of mechanisms that the body has put into place that allows us to perceive the [light] stimuli around us. Photography is one of my hobbies and it is almost impossible to not draw some comparisons between the two. It is spectacular to think that we can recreate something as complex as our eyes; we have created the camera to perform the same task and unlike our eyes, it is capable of preserving what you see in that moment of time. You then have the capability to refer back to that captured moment exactly how it was captured. Aside from the many similarities the eye and a camera have in function and form, they are in no way comparable. Every time I look at a picture I have taken, it never comes out on film as I see it through the lens of the camera or even how I look at it without the camera. Even though their structure is similar: They both have a lens that takes in light and eventually bends it to a focal point. 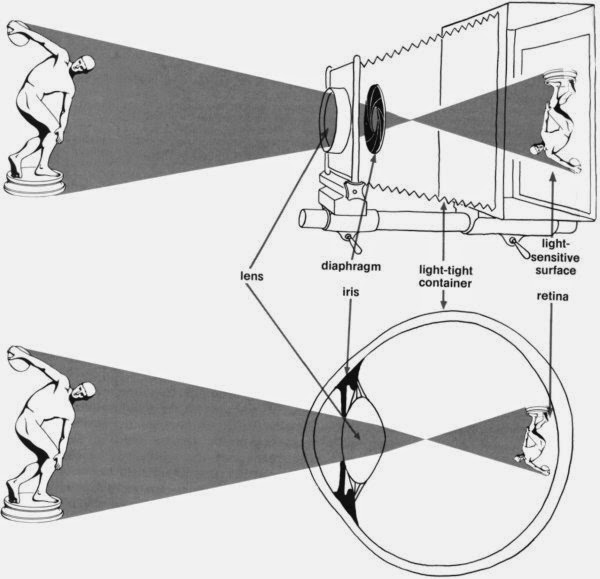 The cornea in the eye takes in the light and bends it into the pupil which is comparable to the front lens of a camera. The next step would be the iris, which controls how much of that light is let in, also known as the aperture in a picture controlled by the diaphragm in a camera. The light is then bent to a focal point through their respective lenses. The light then either hits the retina in the eye or the film in the camera. The main difference between the two is that the lens in the eye has muscles attached to it and can continually focus "on the fly", offering much finer tuning, whereas on a camera you have to adjust the zoom manually to change the focal length because the lenses are pieces of glass that are not as flexible. It's interesting because even though the camera is capturing the exact moment you are observing, it won't EVER be the same because you are viewing that lens of the camera, through the lens of your eye. So as neat as photos are, they are not an accurate representation of what the eye is capable of producing, in terms of "pictures" you see in your head (your vision). Photography is great in that sense because it's almost as if you have a second set of eyes that allows you to view and interpret the world completely differently even though you are looking at the same thing!

Posted by Krunal Majmundar at 8:37 PM