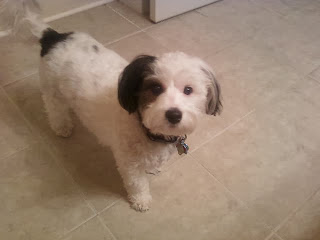 We rescued him about two years ago from a group which got him from an abusive breeder.  When we got him, Mr. Percy was very jumpy and timid, which we attributed to his previous living conditions. As he started to warm up to us and explore the house, he would bump into things. When we threw his squeaky ball, he'd chase it into the yard, run right past it and sniff around until someone went and got it for him. Needless to say, we figured out that he isn't just skittish, he is blind. 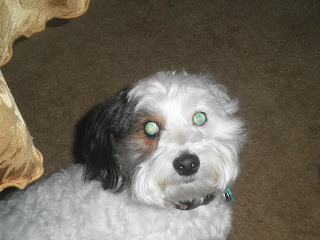 After a trip to the vet, we learned that he had been smacked around before we got him, which led to his retinas being detached.  As terrible as it is, he's in a nice house now, living the life. He has no issues navigating the house anymore, because dogs dominantly get around in the world through memory. So after walking into every surface available to him, he can now book it where ever he wants. I think it's pretty interesting how well he's adapted to his injury. He gets around the house very easily, recognizes people though voices and has no problem finding his food and water bowls.  He's a super happy dog and I'm glad that we got to him when we did. 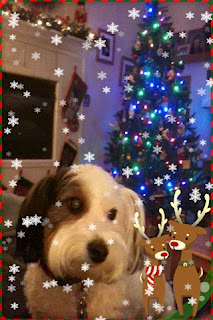 Posted by jgraziano at 4:24 PM