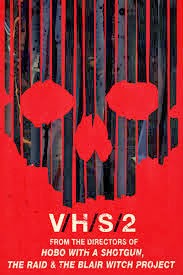 After we talked about cochlear implants in class, I went home and watched this movie, V/H/S/2. It's essentially a pile of four horror shorts, spaced out by it's own plot on Netflix.

The first short started with this guy who is waking up from getting an eyeball implant to help him see after he lost his vision in a car accident. 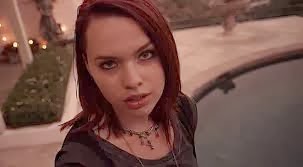 This girl stalked him home from the clinic because she has a... COCHLEAR IMPLANT and she's been hearing weird things since she got hers. Turns out she's hearing dead people because of her robot ear picking up ghost signals which trigger her implant to create a perception, and then the guy starts seeing dead people because of his robot eye doing the same for his vision.

I thought it was an odd coincidence to have a discussion in class about technology-assisted perception, then come across a short movie about it. Although the entire thing was obviously crap, it got me thinking about how possible it might be for someone to come up with a device that picks up stimulus we can't naturally, then triggers your brain to create a perception of it. You wouldn't see ghosts, but imagine being able to see UV light? It would be a whoooole new color. Or you could even switch senses around, like when the receiver in your eye takes in light waves of a yellow length, it triggers your brain to taste raisins or something.

Posted by jgraziano at 5:04 PM