The light discrimination apparatus seen below was manufactured by Lafayette Instrument Co.  This specific device is model number: 14011 with a voltage of 120, a frequency of 60, and a total of 5 watts.    The apparatus was designed to present two 1-3/8 light stimuli from a single common source, however, each stimuli can be independently varied in intensity using precisely tapered aperture scales on each side of the unit.  This unit can be used to illustrate various psycho-physical methods (limits, average error, constant stimuli, ect.) in visual discrimination. 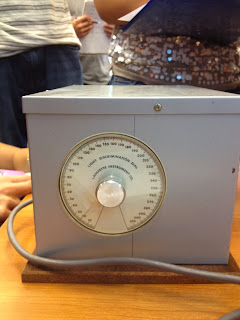 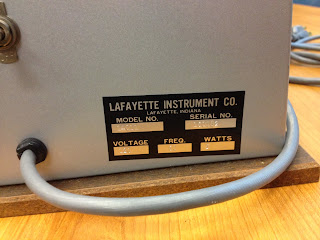 "This is a light discrimination test.  The light on your right is variable in intensity.  The other light is fixed intensity and is called the standard.  Your job is to adjust the variable light so that it looks equal to the intensity of the standard."

Next, arbitrarily set the variable to its maximum or minimum intensity. Say to the subject:

"The variable is now set so that I'm sure it looks a lot brighter (dimmer) than the standard.  Adjust it so that appears equal."

The experimenter should record the subjects response and set the variable randomly either much brighter or much dimmer.  Repeat the same preselected counterbalanced order recording both the sign and magnitude of the subject's response.  When the subject has finished, experiment and subject should exchange roles.

For the results, compute the point of subjective equality, constant error, and variable error.  Discuss some of the error which may have been introduced into the study by the method you employed.

Experiment was taken from :
http://www.limef.com/Downloads/14011manual.PDF
Posted by Drew Saps at 10:46 AM