(thank you Discovery Health and the Science of Attraction Documentary)
Our sense of sight has so much to with assessing other individuals. We perceive the health of other largely based upon how they look. At an instinctual level, perceiving the health of a potential mate is essential to optimize the chances of offspring thriving and reproducing. One way human beings unknowingly perceive the health of a potential mate is simply based on the level of attractiveness. We are hard-wired to believe that faces that are symmetrical and distinctly masculine of feminine are more attractive than others. If a face is asymmetrical, we can unconsciously perceive that during development in the womb, irregularities ranging from uterine temperature, to infection, and so forth have not produced a strong genetic partner. If a face is sexually contradictory, it can be assumed that an individual is less fertile because they have produced less sex hormones during puberty and development. Visual cues like this help hapless human beings navigate through the gene pool to produce offspring that live healthy and reproduce. Researchers have found a mathematical pattern in nature that represents an ideal. They've named it the Golden Ratio and it appears anywhere from shapes of plants, body structure of animals, classical art and architecture, and natural facial benchmarks of individuals that are often considered beautiful. The Golden Ratio itself is a line that is divided by two thirds and a third, and is used for perceiving a healthy potential mate. The Golden Ratio commonly fits the distance of certain features on the face like the bridge of the nose to the bottom of the mouth, the distance from the corners of the eyes, the lengths of limbs relative to the torso, etc. 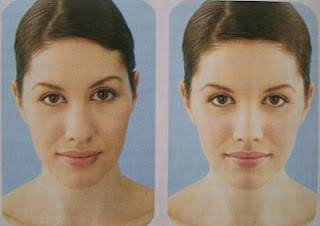 The image to the left is that of the same woman. The picture of the left shows the woman's face with her features exaggerated to be perceived as asymmetrical and the picture on the right has been edited to show her features as symmetrical. We are genetically predisposed to find the woman on the right more attractive because her facial symmetry suggests health and healthy early development. Pretty cool, huh?

Posted by Monica Servellon at 10:18 AM