Imroving and repairing the Auditory system 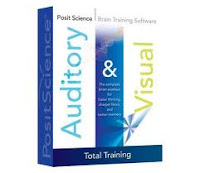 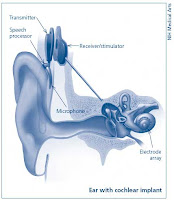 A section in our book which really struck my interest is chapter 11: Sound, the auditory system, and pitch perception. Just last semester I was involved in a service learning project for my gerentology class which enabled me to work very closely with older adults in an attempt to improve, and in some cases, restore many of the physical capabilities these individuals had lost throughout the years due to aging, health issues and personal struggle. One particular participant, an individual we will call Linda, had suffered from multiple strokes in her lifetime. A stroke is defined by the American Heritage New Dictionary of Cultural Literacy as "A sudden loss of brain function caused by an interruption in the supply of blood to the brain. A ruptured blood vessel or cerebral thrombosis may cause the stroke, which can occur in varying degrees of severity from temporary paralysis and slurred speech to permanent brain damage and death." One side effect stroke victims often have to cope with as well though, is a reduction in their quality of hearing. Sudden Hearing Loss (SHL) is a possible, yet not too common, side effect sufferers of strokes may have to endure. Our service learning student Linda did in fact suffer from SHL. SHL is exactly what it sounds like, a sudden loss of hearing in either one or both ears (like in Linda's case). SHL is caused by many different things, including diseases such as measles, mumps, certain diuretics, circulatory issues, and also of courses trauma to the brain (which strokes typically cause).
What I found most fascinating about Linda though, were the actions she took to make an effort to restore as much of her hearing as possible. Cochlear implants were something I had never heard of before meeting Linda, but I became very familiar with afterward. Cochlear implants are small, yet complex, devices which have one portion that is surgically implanted underneath the skin of the patient and one piece which rests behind the individuals ear. The implant is used to provide a sense of sound to those patients who have either partially or fully lost their sense of hearing. Linda was able to explain to us, in great detail all the parts of the implant and exactly how they worked. I found that the device itself consisted of many different pieces: the microphone portion which is used to pick up environmental sounds, a speech processor which takes these sounds and processes them, a transmitter and receiver which converts signals from the processor and converts them into electrical signals, and an electrode array which takes the impulses created by the transmitter and sends them to the appropriate area in the auditory nerve.
Although these implants truly worked wonders for Linda, she still was not fully satisfied with her ability to hear and through research recognized the fact that all of her hearing loss wasn't completely physical, but also involved processes of her brain as well, so she took our class in an attempt to train her brain to sharpen her hearing ability. Our class entailed computer oriented sessions utilizing a computer program called "Posit Science Brain Fitness". The program itself was designed to "speed up and sharpen auditory processing—the listening system of the brain. By improving the quantity and quality of what your brain takes in through sound, it drives an overall improvement in thinking, focus, and memory." So, through various simple brain training exercises Linda was training her brain weekly to speed up her auditory processing and ultimately improve her overall auditory health in general. By the end of month long training Linda genuinely was able to pick up on certain sounds and pitches she had not previously been able to. I personally, would recommend this program to any individual who suffered from any type of hearing or memory loss as it is truly an effective alternate route to major surgeries, or in cases like Linda's, an excellent accompaniment to her cochlear implants.


below is a link to the Posit Science Brain Training website, which is the program we used in our project.
http://www.positscience.com/our-products/brain-fitness-program

Here is a short youtube video explaining in greater detail how the program works
http://www.youtube.com/watch?v=qk20ffgYI50&feature=related