Just as Gunnar Johansson (Goldstein 2010) created point-light walkers stimuli by placing small lights on people’s joints then filming the patterns created by these lights when people worked and carried out other actions in the dark. This motion of a person or other living organism is called biological motion. A similar scenario can be observed in a recently new game called Training Camp.

The EA sports active game called NFL Training Camp for the Wii is similar to Johansson point light. Here sensors are placed on different parts of your body in order to keep track of your movements.

It not only gets you in shape but tracks many important elements of your body such as your heart rate, calories burned etc..

Just click on the title "Biological Motion" and enjoy. 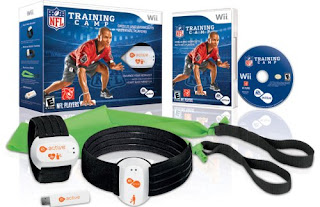