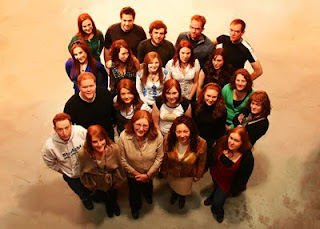 The Pain of being a Redhead
As we will learn in Chapter 14 pain is caused in various ways like signals from the skin sent to the brain, a person can also have pain not related to the skin; example an amputee. A person’s mental state can affect the pain state like a soldier in war. A person’s attention can also play into a person’s pain; for example, the more attention brought to an incident the worse the situation gets, rather than just ignoring it. A person’s hair color can also have an effect on pain. An article by the New York Times titled The Pain of Being a Red Head published August 2009, shows results of a study found redheads have a mutation gene called MC1R that results in having a lower pain tolerance then people with blonde, brown and black hair. The MC1R in located in the 16th chromosome and predicts hair and skin type. The more pheomelanin produced in this gene results in red hair and fair skin. A study taken in 2004 proves that people with red hair need 20 % more anesthesia then others and are more resistant to numbing drugs given by dentists. I learned firsthand when I have my wisdom teeth out this time last year. The doctor said I was awake the whole time during the procedure although I do not remember it. She was very surprised at how much anesthesia she had to pump until I was numb.
http://well.blogs.nytimes.com/2009/08/06/the-pain-of-being-a-redhead/
Posted by lundk at 5:57 PM