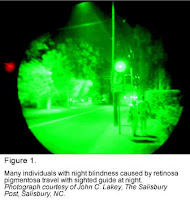 The article from PyschInfo that caught my attention addressed the issue of Retinitis Pigmentosa(RP), a condition that affects many people and can be a challenge to live with. The condition is a degeneration of the retina that is passed from one generation to the next. It is hereditary but may not affect everyone in the family. It also attacks the peripheral rod receptors and can result in poor or no vision at all.

My deceased uncle had RP and his daughter who is 21 years old has the first signs of it, as well. Before my uncle passed away he was completely blind in both eyes. As a little girl, I remember him always wearing his night glasses and having to help him navigate everywhere.

The article I read tied into chapter 3 because, it discussed Hartong et. al. (2004) previous study about night-vision goggles(NVG) for night-blind subjects. The study was subjective and consisted of 11 of Hartong's subjects that chose to buy the night vision goggles and participate in a follow up study. The subjects were asked to evaluate the goggles after one and two years use. They were also required to fill out two questionnaires to get subjective data about there experience with the goggles. At the end of the two year study, 2 subjects stopped using the device, 2 only used it once a week and 7 people claimed to use the NVG's at least twice a week.

The study concluded that the subjects used the goggles more in the winter/autumn months(due to lack of daylight hours) and gave them a sense of independence again. They were able to do more daily functioning activities alone, such as walking outside or in a crowd, going to work, even navigating around the house easier. Although, this study was bias because there were only 11 participant's that ranged from 25 years old to 61 years old( 10 male and 1 female), I still felt that it gave me a sense of what these people go through on a daily basis. I could not imagine losing my vision. After seeing my uncle struggle with his independence, I can say that the little extra help of the NVG's can make life a bit easier for people with the condition.
Posted by Jamie Muskett at 11:22 AM