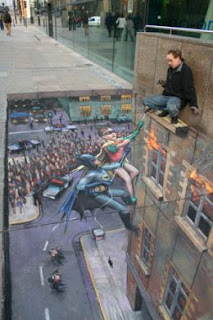 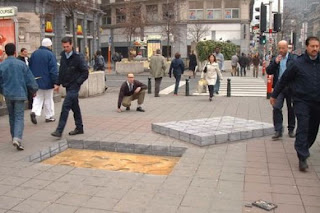 As complex as the theories behind "perception" are, you would think that our eyes would be able to decipher that this chunk taken out of the ground is merely a drawing. Crazy...right?!
Artist Julian Beever is known for his "trompe-l'oeli" art work which, in French, literally means "tricking the eye." Beever makes the sidewalk-chalk art appear so realistic and three dimensional by using a projection called "anamorphosis." The "anamorphic" illusions are drawn with some sort of distortion, which consequently creates the three dimensional images on the sidewalk.
Another aspect of this type of art is that the vantage point in which one views the images will greatly influcence how the image is perceived in the brain. For instance, if someone coming from a few blocks away sees the image, it may appear like a bunch of blobs on the sidewalk. As the walker approaches the artwork, however, they will be in awe at the images that...well, literally appear to be standing before them.

(This is my "perception" of the picture on the right, but it seems as though the guy on the left is trying to avoid falling "into the hole" by walking around the drawing...he could also just be a polite individual trying not to step on the artwork though. Who knows....?)

More amazing artwork, and the information used for this blog, can be found at http://hubpages.com/hub/Incredible_Beever (or you can simply click on the title of my blog "Fooling the Eye.")

Watch this video and see exactly how Beever "defies the laws of perception."