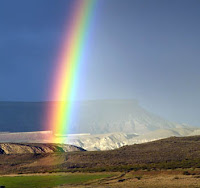 Weather generally refers to the atmospheric phenomenon or meteorological conditions within a planet that prevail over a shorter time period. Sometimes such incidents occur within the surface of that earth that cannon properly be explained, which are caused by unusual weather activity or individuals imaginations.
The most common of weather illusions are mirage, rainbows, halo, Northern lights, and so on. Rainbows are are one of the
most interesting weather illusory phenomena. A rainbow is an optical phenomenon which occurs when the sunlight shines through droplets of water or raindrops within the earth's atmosphere. The spectrum of of light in the sky is visible to the naked eye when sun rays fall or the raindrops of water within the earths atmosphere. A rainbow takes the form of a multicolored arc, with the colors of red, orange, yellow, green, blue, indigo, and violet. A moonbow (a rainbow reflected off the surface of the moon rather then direct sunlight), lunar rainbow or nighttime rainbow can rarely be seen on strongly moonlit nights. Although humans visual perception for color is poor in low light, which moonbows are often perceived to be white.
A mirage is another naturally occurring optical phenomenon, where light rays are bent to produce a displaced image of distant objects or the sky. What the images of a mirage represent are determined by the human mind. An example could be inferior images on land are easily mistaken as bodies of water.
Posted by kresenly at 6:45 PM