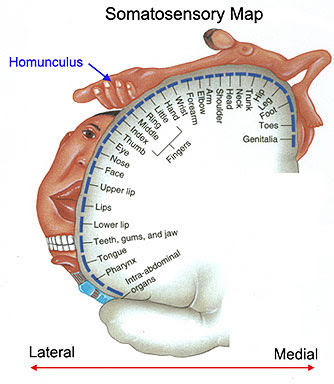 Many people take for granted everyday experiences they encounter, such as listening to a song or looking at the world around us. After having this class, I have come to appreciate the beauties of life much more and understand how complex the mechanisms to the perceptual experience really is. I have learned how the perceptual process works through stimulus, electricity, experience and action, and knowledge, all of which includes the physiological processes involved in perception. Brain areas are studied in correlation to perception such as the striate cortex,lobes, hemispheres, all of which effect to navigation, attention, and movement.

Not only are the functions and processing of perception learned, but diseases and disorders are also discussed throughout the class. Diseases and disorders that relate to perception include visual form agnosia effecting the recognition of objects, colorblind, retinitis pigmentosa that results in poor vision in the peripheral field, prosopagnosia effects the reconition of faces, body dysmorphic, or the growing sensation of phantom limb syndrome. All of these disorders were fascinating to learn about that really shows you how perception can effect how we see all things in the world, incuding each other.

My favorite subject to learn about was the phantom limbs which is a phenomenal discovery that an amputated or missing limb experience the limb still being attached. Approximately 60-80% of individuals with an amputation experience these phantom sensations, most of which are painful. The sensations are so convincing to the amputees that they even try using their nonexistent limb as it still feels apart of them and moves with their body. The pain they feel was first said to be from the nerve endings in the stump of the limb sent to the brain. Treatments for this pain led to further removal of the limbs in hopes of cutting off the inflamed nerve endings. However, further research proved that the brain would reorganizie if sensory input was cut off. This led to, Ramachandran's discovery that phantom limb sensations could be due to crosswiring in the somatosensory cortex. Ramachandram created a system to help eliviate the pain from the phantom limbs. This treatment was the mirror box, which was an artificial visual feedback that allows the patient to "move" their phantom limb and to unclench it from possibly painful positions. Continuous treatment with the mirror box has led to long term improvement.

The following youtube video is about a 23-year-old said, referring to the prosthetic limb that replaced the real one he lost in Baghdad on Dec. 17, 2007, when the Humvee he was a gunner on ran over an improvised explosive device. Before using the mirror box treatment to overcome his phantom sensations, Wagner said he often had the sensation that one toe was crossed over another or he felt like someone was stabbing him between his toes. He was determined to overcome this sensation and stated, "Disability is only a state of mind." Enjoy!

After understanding what a significant difference our perceptual processes have on us, I can look at the world with a deeper agenda to see the complexity and beauty around me. When I see and hear objects or tones I can begin to think about what I have learned and how I am processing information and how one electrical firing can lead to another and another to give me the ending result I see or hear. Perception can most definitely relate to real world problem and current issues such as phantom limbs or body dysmorphic. Not many people are aware of the eye disorders that are among us. These disorders can clear up a lot of the misconceptions people may have about perceptual disorders such as colorblind. Learning about colorblind has allowed me to be aware how humans see the color spectrum compared to how animals, such as dogs, see the color spectrum. I have definitely learned that dogs do infact see color and maybe, if others learned of this research, less red toys will be produced for dogs and more so the colors dogs can see! Maybe this will help Buddy find his toys in the yard faster!
Posted by Meghan G at 1:11 PM