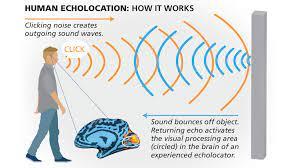 Along with my first post, another post I find intriguing is echolocation. As a child growing up,  you learn that the only few animals to use echolocation were bats and dolphins. Below is a link leading to an article on animal echolocation. As an adult learning that most if not all humans can learn how to echolocate is astonishing. Echolocation is typically used by people with vision impairments, to help them to "see". They produce clicks that bounce off of objects in their space, to be able to tell where those objects are exactly. 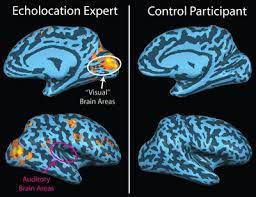 Not only this, but there are different techniques and uses for echolocation. Things such as "facial vision theory", hearing silent objects, and hearing space itself. Discovering echolocation in humans have allowed us to adapt to other normalcy's for people with vision issues. Another great example is beeping pitches where it's basically baseball, but with sound instead of vision. Below is a TED Talk on how kids who are blind use tongue clicks to navigate.

Posted by Angelina Marte at 7:02 PM