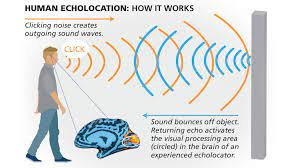 As I first started reading, See What I’m Saying, I was immediately compelled by Daniel Kish, Brian Bushway, and Megan O’Rourke riding their bikes. Riding a bike is something that would not be considered compelling, but they were blind and riding bikes better than I could. This shows my naiveness to the subject. These bike riders would use echolocation to determine their location and navigate through it. They would make a clicking noise and would use the time delay between the chick and the sound reflected to determine how far a silent object was. Therefore, the father an object was the longer it would take to be reflected. Daniel Kish would train other visually impair to “achieve freedom” through echolocation. 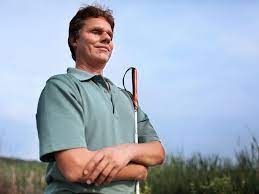 Previously I thought echolocation was only done by bats and now learning that humans echolocate as well is very eye-opening to what our perception can do. Echolocation is something that we all do, and we do not necessarily need to produce sound to do it. Echolocation allows visually impaired people to sense their surroundings and can be beneficial. I found Kish to be very inspiring and fascinating and caused me to be excited to read more about perception.

After learning about Daniel Kish, I wanted to know more about him.

I found a ted talk of him explaining how he echolocates:

Similarly I also found a video of Kish performing echolocation while riding a bike like read in the book, See What I’m Saying:

Posted by Lauren Barbalacci at 8:17 PM