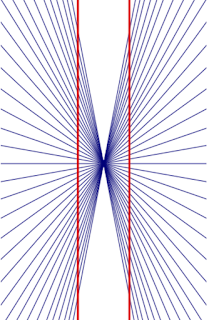 A German physiologist, Ewald Hering, discovered this illusion in 1861. Hering concluded the illusion to our brain's overestimation of angles creating an apparent bend in parallel lines. Contemporary researchers have bolstered this conclusion through a hypothesis that states there is a operation humans perform to compensate for the lag time between the time that light hits the retina and the time in which that information is processed.
Posted by Nico Luzio at 10:12 PM