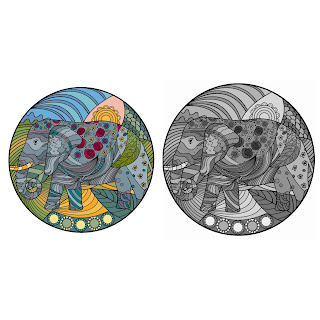 On my phone, I have the app “Happy Color” which is an app that has multiple coloring pages that have you color by number to create an image. This first picture shows one of the first ones I colored on the app. Because I am fully able to percieve color, I can see the Elephant that is colored in the middle of the image. I copied the image and put it in black and white to reprent what the image would look like as a Monochromat. Monochromats are truy colorbling for have no functioning cones so they only percieve white, gray and black tones and no color. In the second image, it is a lot harder to pick out that the image created an elephant due to the elephant and background not being clearly distinguished.
Posted by Allie Desmond at 1:04 PM