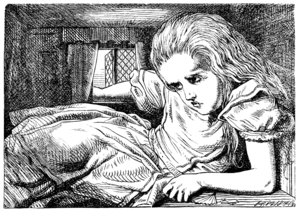 After reading Chapter 6 in the text, I couldn't help but think of Alice in Wonderland Syndrome. It's a rare condition that causes people to experience size distortion such as micropsia, macropsia, teleopsia, and pelopsia. In other words, it causes one to perceive objects and/or one's own body to either grow or shrink, just like Alice in Lewis Carroll's novel, for which the condition is named. This condition is not one of the eyes, but rather, one of perception. These episodes may also occur alongside migraines and epilepsy, but typically don't last long, resolving in under an hour.

As a child, I experienced this quite often, mostly at night when I would try to fall asleep. It was terrifying. Even with my eyes closed, I could see and feel everything shrinking and moving away from me, sort of like the endless hallway scene in Poltergeist, and I felt like I was growing in size. I would perceive my hands growing, my fingers extending in length so far that to bend them required the same amount of force as to twirl a long wooden rod. Using my mediocre 7-year-old vocabulary, I could not effectively communicate that I was hallucinating, so my parents took me to an eye doctor. They found nothing wrong with my eyes; I have 25/20 vision, but the doctor fitted me with bifocals anyway, because I described things as appearing "small" and "far away" during these episodes. As I aged, the episodes became less and less common, and now rarely happen at all, and only occur if I'm extremely sleep deprived. It wasn't until I was a senior in high school and came across an article about Alice in Wonderland Syndrome that I suspected what might have been going on when I was a kid.
Anyway, I just thought this is an interesting example of how perception can go awry. Below are a couple of websites that describe the condition in more detail.