Why does your dogs eyes glow? 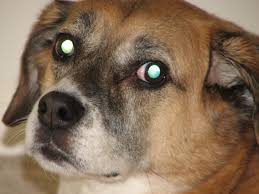 In the dark, their eyes react to exposure to light differently than our eyes. Dogs (along with cats and other animals) have a light-reflecting surface known as the tapetum lucidum, located between the optic nerve and the retina. It reflects the light and allowing the rods and cones to pick up the limited amount of light available at night.
This is a feature in animals who tend to be hunters at dawn and dusk. The eyes of these animals are geared for low-light vision. They include dogs, cats, cattle, deer, horses and ferrets.
We don't have this feature since we do not have the tapetum lucidum and mostly since we are more active during the day. The glow varies by animal and the amount of zinc or riboflavin present in pigment cells within the tapetum lucidum. The animal’s age, color of his coat and eyes, can also influence the glow. The age can change reflectivity as the lenses become denser.
Most dogs are born with blue to purple tapetums, but the color shifts by 16 weeks of age. It is said that adult yellow Labradors tend to have light yellow-colored tapetums and black Labs tend to have deeper yellow or green-colored tapetums. Dogs with white coats and blue eyes can give off a red-eye effect in dark settings. The red-eye look is due to blood vessels in the eyes that reflect when exposed to light.
Reference
http://www.vetstreet.com/our-pet-experts/why-do-my-dogs-eyes-glow-in-the-dark
Posted by Andrea Palacios at 10:32 AM