Why do cats have vertical pupils?
by Benjamin Dykstra

If you have a pet cat you’ve probably noticed that it has vertical slits for pupils. Have you ever wondered why this was the case? New research from the University of Berkeley suggests that vertical pupils allow cats to have better night vision. Vertical pupils can contract and dilate more than circular pupils. This always cats to dilate their eyes to see in the dark. Vertical pupils also provide cats with superior depth perception. The main way that animals determine depth without moving is called stereopsis. Stereopsis is the ability of the brain to triangulate an object by calculating how far apart the eyes are and the angle at which each eye is rotated. Stereopsis is easy for cats because their pupils are very narrow which means they can determine depth very accurately. Depth perception is especially important for cats because they hunt by sneaking up on and pouncing on prey. Researchers at Berkeley have found that most small predators that ambush their prey have vertical pupils. This group includes small cats, snakes, foxes and alligators. 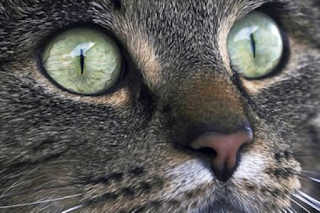