Charles Bonnet Syndrome is when people who have become blind or have deteriorating vision start to have hallucination, this is most common in elderly people because their sight starts to deteriorate. The prevalence for this syndrome in visually impaired people in about 10% to 38% . Below is a video of Oliver Sacks giving a TED Talk on Charles Bonnet Syndrome, he has worked with many people who have experienced these hallucinations. These hallucinations are different from ones that people with schizophrenia have because these hallucinations do not involve the person having them. As well as they are only involving one sense, their sight. The visions are like a movie in their heads just watching from a far, nothing interacting with them. Normally the visions appear and vanish suddenly, often involving colors, shapes, people with over sized eyes or mouths, familiar objects, and some times these visions can be fighting. He says that the reason why this happens is because your visual part of the brain is no long getting input so it becomes hyperactive creating things that aren't there or trying to fill in the blanks. I thought this was interesting because I have never thought hallucinations would happen to people who are blind, as well as those people being completely sane. It seems pretty cool that people who can no longer see could have the possibly to see things once again even if they are just in their imagination, This image below is what a face could possibly look like through the eyes of someone experiencing this syndrome. 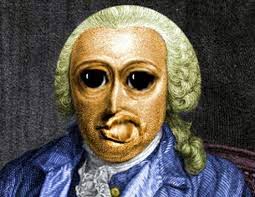 Posted by Alaire Thomas at 4:10 PM