The Risks of Lighter Eyes 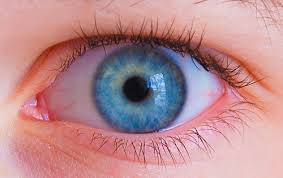 Many of us have heard that lighter eyes such as blue eyes can cause sensitivity to light. Is this true? According to Ruth Williams, MD, president-elect of American Academy of Ophthalmology the answer is yes. Williams states, "clinically speaking, people with blue or light-colored irises do tend to be more light-sensitive, this is likely due to the sparsity of light-absorbing pigment in the eye". This means the more amount of pigment someone has, the less amount of light that is able to get through to the iris. People with lighter colored eyes might also be at a higher risk for cancer. This is because people with lighter eyes have less pigment to protect them against ultraviolent rays. Dr. Williams suggests, "people with light iris color need to be diligent in wearing UV-protected sunglasses". It's interesting to note that in black Americans (who are typically brown-eyed) getting melanoma of the uvea is less than one-eighth when compared with the incidence in white Americans.
Posted by Brielle Stanks at 10:31 PM