Sensory deprivation tanks are exactly what they sound like- small rooms or capsules where all sensory information is blocked out. This includes sight, hearing, touch, smell and taste. The purpose of these tanks differ according to whatever the researcher desires.
They were initially created by John C. Lilly in 1964 to observe the effects of sensory deprivation. Most modern tanks involve flotation in water and raising the temperature of the water to ones’ body temperature. Other uses include relaxation and meditation, and in recent decades, they have also been embraced by alternative medicine advocates.
Studies show that flotation tanks are effective at lowering stress levels, and an added benefit of using these is that they reliably reduce stress in only forty minutes.
An interesting study was testing the effects of psychotropic drugs on people in isolation tanks. The study had shown that the hallucinations of the subjects who used them were much more abstract and violent than what one would otherwise experience. This is because when someone hallucinates, their brain uses objects in the environment to  alter or jump off of. In an isolation tank, the only stimuli the brain has is itself to create the hallucinations, and therefore are more powerful. 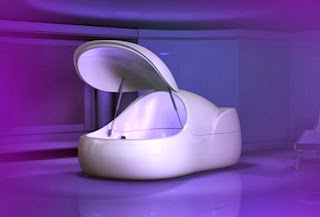 Posted by Joe Pettinelli at 5:58 PM