Associations of Color and Sound 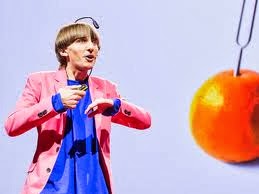 Artist Neil Harbisson now associates color with sound after he was born with a rare vision disorder called achromatopsia. Because he was born with achromatopsia, he does not have normal cone vision and has total color blindness. With the help of a prosthetic device on his head, an “eyeborg”,  it now allows him to perceive color in a different way by “hearing color”. The device emits a different sound for different colors. He perceives the world differently since the age of 21, when he received this device. With the help of scientists, they created an electronic eye that detects the color and sends a signal to a chip in the back of his head and then he hears the sound through bone conduction. He first had to memorize certain notes with the names we have given colors. Over time this became a perception where he would not have to think about it. Eventually, he started having favorite colors and then started dreaming of colors. 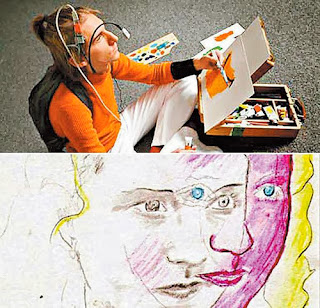 He will even create sound portraits depending on the sound it picks up when he looks at someone. He relates people due to their sound as well. Since he has adapted to this device, he now associates these sounds with a certain color. When he heard a certain telephone ring, he felt green and Mozart became a “yellow experience”. He also started to paint people, music, and famous speeches based off these frequencies. He can perceive 360 colors just like regular vision, but then found that the electronic eye can pick up inferred and ultraviolet that the human eye cannot perceive. He created a foundation to encourage people to use technology to extend their senses as well. Instead of creating apps for the phone, he believes we should be creating apps and devices for our own bodies.
http://www.ted.com/talks/neil_harbisson_i_listen_to_color.html
http://www.ted.com/speakers/neil_harbisson.html