Earlier in the semester we spent a class period talking about different tools that Professor Berg found in the Psychology closet when they were relocating the psychology wing. He brought them into class and had use examine and take notes of which tool we thought was most interesting. The tool that I found most interesting was a discrimination weight set. The set had little tubes with lids that belonged in a tray. There was also the name Lafayette engraved on tray, which, at the time I was not sure if that was where the set was manufactured, or the name of the company that produced the set. At first I was not sure what they did, or how they were used but from doing some research online, and talking with other classmates, I found out that they can be used in psychological testing. I looked online under “Lafayette weights”, and “Lafayette weighted testing tubes”, and actually found a set that they sell today for three hundred dollars (picture located below). In the description of this tool I found out that it is actually called a discrimination weight set. It is used to test perception of pressure sensitivity. The discrimination weights consists of two series of twelve weights. The light series weighs from 75 to 125 grams; while the heavy series weighs from 175 to 225 grams. What I found most interesting about this test is that the company guarantees that the tubes/sets are unbreakable and all the tubes are supposed to be identical in color, size, and texture. 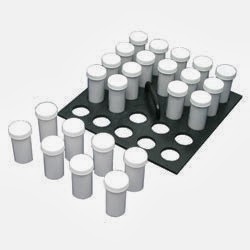 Posted by Catherine Sands at 9:05 AM