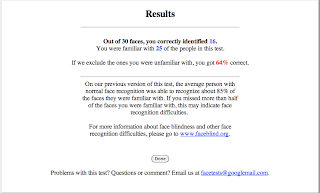 For my first blog I decided to take the face recognition test from www.faceblind.org. To my surprise I didn't do so well. I thought I would have been average on recognizing faces, but instead scored below average. I got 16 out of 30 faces correct. That's kind of bad considering I was familiar with 25 of them. If they excluded the faces I did not know I would have gotten a 64%. The average level is 85%, but hey at least I got more than half of them correct. I thought this test was pretty interesting, and now I know where I stand with recognizing faces.
Posted by Unknown at 10:21 AM