Grouping:
Gestalt psychology focuses on how people interpret the world.  According to Gestalt psychology the whole is different than the sum of its parts, psychologist in this field developed a set of principles to explain how smaller objects are grouped to form larger ones.  There are 5 laws and they are:

Similarity: this law states that items that are similar are usually grouped together.  For example take the image below, most of us will see vertical columns of circles and squares instead of a horizontal row of dissimilar shapes.

Law of proximity: this law states that items that are close to each other tend to be grouped together. For example in the image below we are going to see 2 sets of 6 circles rather than 12 separate circles.

Law of continuity:  this law states that we perceive smooth, continuous patterns rather than
discontinuous ones.  For example in the image below we are going to see 2 separate lines rather than one, according to this law the reason for this is because we prefer to view things as flowing smoothly rather than breaking lines up into multiple parts. 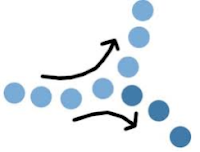 Law of connectedness: this law suggests that if objects are uniform and linked we are going to view them as a single unit.  For example in the image below we are not going to view the objects in this image as single objects but rather we are going to make sets of two dots and a line.  In the first row I will see 4 sets of 1 line and 2 dots rather than 8 circlers and 4 lines reason for this is because if the objects are close together we have the tendency of making them into one set.

Law of closure: suggest that objects grouped together are seen as a whole.  For example in the image below we tend to ignore gaps and complete the whole object, when we look at this picture there are no triangles but our minds fill in the missing information to create familiar shapes and images.

Posted by lorena castiglione at 1:42 PM