The Gestalt approach to perception is very interesting. It basically says that the whole differs from the sum of its parts. Gestalt psychology tries to explain perceptual organization, which involves the grouping of elements in an image to create larger objects, through six laws of organization.

The law of prananz or the law of simplicity is the fundamental law of Gestalt psychology. It says that every stimulus pattern is seen in such a way that the resulting structure is as simple as possible.

Here we see five circles connected together, not just the individual circles or one big object. We see the simplest form of the object and know that they are connected together to form an object that we know as the Olympic rings.

The law of similarity says that similar things appear to be grouped together.

Here we see a circles and triangles, but we tend to group them together as two rows of triangles and two rows of circles because of the law of similarity.

The law of good continuation states that points when connected result in straight or smooth curing lines are seen as belonging together and the lines tend to be seen in such a way as to follow the smoothest path. 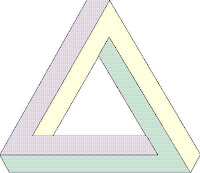 We still see a triangle from this image even though it is made up of different color segments and each segment seems to end, but we are able to realize that whole thing is a triangle.

The law of proximity or nearness is that things that are near each other appear to be grouped together.

This image is made up of random dots, but we tend to group them into two sections: a triangle of dots of the right and a cluster ovalish figure on the left.

The law of common fate says that things that are moving in the same direction appear to be grouped together.

All of the cars are driving the same way down a highway, moving in the same direction making them appear to be grouped together.

The law of familiarity states that things that form patterns that are familiar or meaningful are likely to be grouped together.

This painting plays off of the law of familiarity by patterns of eyes, noses, checks, and chins being used to form faces in the forest. There are 13 faces hidden in the picture. I found 12, how many can you find?