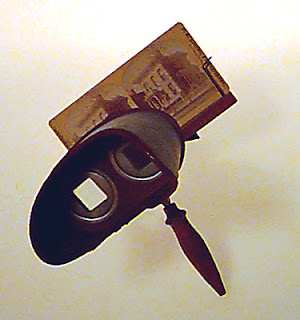 Stereoscopes, also known as stereopticons or stereo viewers, were one of America's most popular forms of entertainment in the late 1800s and early 1900s. The first patented stereoscope was invented by Sir Charles Wheatstone in 1838. The left picture represents what the left eye would see, and likewise for the right picture. When observing the pictures through a special viewer, the pair of two-dimensional pictures merge together into a single three-dimensional photograph. The right and left eyes see a slightly different version of the same scene, and taken together, we get an illusion of depth. This phenomenon had been known for quite some time, ever since the ancient Greek mathematician Euclid discovered the principles of binocular vision. Some people are unable to experience this event. According to a research done by a charity in England dedicated to the eye; The Eyecare Trust has found that many people who experience eye discomfort or headaches while watching a 3-D suffer form some form of visual impairment that prevent the brain from correctly process the information transmitted by the eyes. Some Binocular disorders that can affect the ability to see 3-D movies or images are Phoria which is some of the muscles in the eye are weak and when the eye is fixated on an object the eye moves away from the object. Another is Binocular rivalry this is where one eye is shown one image and then another is introduce to the other eye, instead on focusing on both of the images the eyes take turn in focusing first on the first image and then on the second one. A sign that someone might suffer from this disorders is fatigue of the eyes when watching television or starring at a computer screen. The disorders can be detect by a simple vision test. The cover-uncover test is where one eye is covered while the other is left uncovered; an image is shown if the uncovered eye moved from behind the card covering it then the person suffers from Exophoria. People who suffer from these disorders when shown the 3-D images usually just see the green and red colors used to separate them. Treatments include correcting eye glasses or vision therapy where the eyes are trained to focus on the same item. The study done in England found that about six million people are unable to see a movie in 3-D. I'm one that will only see the red and green colors used and will suffer from a headache. I gave up watching 3-d movies but maybe will try now that I wear eye glasses. 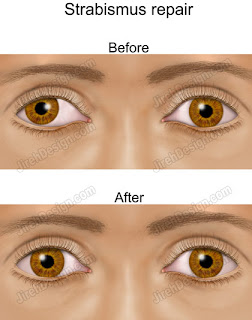