Perception can be most generally thought of with three major components in mind: Stimulus, Electricity, Experience and Action, and Knowledge. Throughout the study of perception each of these constantly comes into play, for example, stimulus is what is actually ‘out there’ in the environment as well as stimulus that occurs within the body. An example of this would be a tree one could look at in the environment which then creates an image on the receptions within one’s retina. Next, electricity plays a crucial role in all perception as via transduction, the transformation of one form of energy into another form, generally occurs through electricity throughout the entire body. These electrical signals are processed which eventually leads to experience and action which is what most people think of when asked about ‘perception.’ This would be what we actually see when we pass by a tree. This experience and action is also influenced by knowledge as, for example, a botanist would likely notice many small details about a tree that an average person would overlook.

These general concepts are used to study all types of perception whether it is vision, hearing, or feeling. In addition to the example above, one can consider listening to music as another form of perception. The stimulus, in the environment, are sound waves. These sound waves make contact with the ear, and the receptors inside to create an internal stimulus that eventually is processed via electricity. As these signals are processed the mind perceives the sound as music, and depending on ones knowledge of music one may recognize that sound as a specific artist. These same guidelines can also be applied to the perception of touch, smell, taste, motion, and a wide variety of stimuli.

My favorite parts of learning about Perception are all of the different ‘illusions’ or other pyschophysical demonstrations which actually show how our senses perceive the world. These examples span the entire range of senses which one can study, but I will focus on a few of them to give an idea of what it meant. One example is ‘simultaneous contrast’ which demonstrates that the brightness of one area is affected by the presence of a nearby or surrounding area. This can be seen by looking at the picture below. 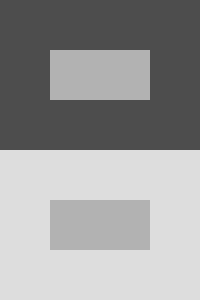 Both squares in the middle are actually the same exact color. Try taking a piece of paper, poking two holes in it, and placing it over the surrounding colors. You will be surprised to see that they are the same color. This effect can be explained by the idea of ‘lateral inhibition’ where by receptors in the retina not only converge and fire but also send signals of inhibition or order to create the thing, image, we actually see. I have also noted another illusion in a previous post that is called the ‘waterfall effect’ or as I dubbed it, the ‘Guitar Hero Illusion.’ Another way to see how our system of perception works is seen in a video I created below about change detection. And yes, I certainly mispronounce 'continuity' a number of times.

It is interesting because not every college course that one takes translates directly into the outside world, but the study of perception certainly does. As in my previous posts on the ‘Guitar Hero Illusion’ and ‘Water interrupts my optic flow’ I begin to realize some of the reasons behind the things I see, feel, and hear. For example, when approaching an intersection I happened to noticed a red left turn only light before seeing the green light further off to the right. My immediate reaction was to hit the break and start to slow down. Upon reflection, and after taking this course, I know that my brain is hardwired to react a certain way to certain colors in a certain context. That is, when I perceive a red light while driving my brain immediately says, ‘STOP!’ which is exactly what I had done. It is helpful to be able to understand why one perceives and experiences things as one does, and even with only an introduction to perception it makes many daily experiences lucid.