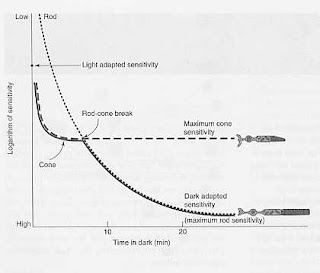 The topic I have always found interesting is our eye's ability to adapt to seeing in a dark room. The term dark adaptation refer's to the eye's increase in sensitivity in the dark. At night as I am getting into bed my light switch is on the opposite side of the room from my bed. I always turn it off and feel my way over to my bed hoping not to stub my toe on something. (which i usually end up doing). However I began noticing by the time I reached my bed I generally can see distinct outlines of objects in my room. Our eyes begin to adjust to the dark in two steps, the initial rapid adaptation is caused by the cones adaptation, and the second is caused by the rods adaptation. If you walk into a brightly lit bedroom then after a few seconds turn the lights off, stand there for a minute and watch as initially you see fuzzy images. After a little time the images outlines become more distinct and the dark room doesn't look so dark anymore.

This two step process is referred to as the dark adaptation curve. Researchers can measure this process through three separate experiments. The first one is to measure the two stage dark adaptation curve that is caused by both the rods and cones working together. The next experiment measures the cones sensitivity levels in dark adaptation, and the same with the rods. In the rod and cone experiment the observer is asked to look at a small fixation point while paying attention to the lights on the side. In this case their focusing on the fixation point interacts the fovea, and paying attention to the lights falls in the periphery. From this experiment researchers noticed that sensitivity to the dark increases in two phases. The sensitivity increases rapidly for 3 to 4 minutes after the light is turned off and then levels off, it will begin to increase again at about 7 to 10 minutes and will continue to do so until about 20 to 30 minutes after the were extinguished.

Much like the experiment done to test the whole process of dark adaptation, reseahcers use the same experiment with some tweaks to test the cones and rods sensitivity levels separately. To test the cone level researchers asked the observer to focus solely on the lights so the image will fall on the all cone fovea. As you can see by the image above the cones are sensitive at the beginning then level off because you will see with the experiment done to test the rod's sensitivity the rods begin to take over the dark adaptation curve in the second phase. In the rod experiment the reseachers had to ask an observer who does not have cones so they could determine how quickly only the rods adapt to the dark. As you can see above where the lines intercept this is referred to as the rod-cone break where the cones sensitivty levels off and the rods begin to take over.

One of the last ideas of dark adaptation I have found to occur to me on numerous occasions is how the longer our eyes' adapt to the dark when we walk out into a lit room our eyes are extremely sensitive right away and need to adjust just like they do in the dark. This usually happens to me when I go to see a movie during the day time hours. After a few hours watching the movie in a extremely dimly lit room, I walk outside to get to my car and I'm blinded by the light initially. I've noticed that when I first walk outside the sun light is so bright I can barely see the objects in front of me they are all just a blur, after a few moments though the light level seems to dim to a normal sun light level and my eyes have adjusted. I picked this topic from our book because it was a topic that I always noticed but never knew it was a two step process and two separate parts of the eyes working as one. Recently after reading about dark adaptation I've began to pay more attention when I go to shut my lights off at night to watch for the gradual two step process of dark adaptation. I like now to pay attention to how our eyes ability to see objects at night increase with time.