Change blindness can be defined as a phenomenon where the brain does not have a concise representation of the world, but one made up of partial details.  Young children are exposed to change blindness in games and puzzles that are reared for them.  One puzzle that is a representation of that is called Spot the Difference.  These childish puzzles first show an original image on the left, and almost the exact replica of the same picture on the right.  The right picture, however, will have a slight difference, whether it be as easy as a color change, or a tough one where a tiny sign had popped in the second picture. 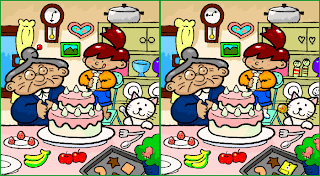 
This visual comparison is used in intelligence testing and is said to be the first stage in child's development of understanding geometry and measurement.  Researchers say that a series of these tests can also compute the "general intelligence factor".

If you didn't notice all the changes like me, you are experiencing inattentional blindness.  This means, even if it was in full view, you brain failed to perceive stimuli that wasn't attended.  If you are not paying particular attention to a certain object, you will never notice a change.  This type of change blindness is a less childlike way to test certain intelligences and brain activity in adults.  These two demonstrations are really interesting.  I never knew that a puzzle that teachers administered in elementary school would be something that I would later learn about in a psychology class.  It also is really impressive that these simple puzzles and videos can depict where on the learning spectrum an individual is.
Posted by megh at 8:01 AM