How Does a Horse See? 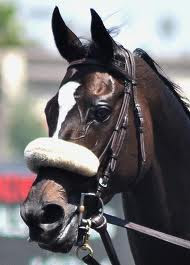 Horses are prey animals. When it comes to the “fight or flight” response, the horse will always run from danger. Horses have the largest eyes of any land animal. Horses are very sensitive to motion. They detect motion first in the periphery where they have poor visual acuity. The acuity of the horse is 20/33 unlike that of humans which is 20/20. They have lateral eyes (on the sides of the head) which allow them to have a visual field of approximately 350°. Only about 65 degrees of the equine visual field is binocular vision while about 285 degrees is monocular vision. Lateral eyed animals have a wide field of vision which is extremely important for detecting predators.

Horses have two “blind spots” (where the animals can’t see) that are present in their field of monocular vision. One “blind spot” is in front of the face. A cone shape is created and lies between 3-4 feet in front of the animal. The second “blind spot” lies directly behind his head and extends over the back and behind the tail when standing with the head facing straight forward. “Blind spots” prevent the horse from seeing an obstacle just before he takes off over it. 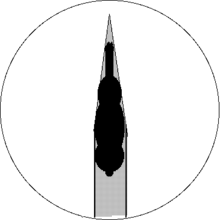 Horses have a smaller field of depth perception than humans. Horses use binocular vision by looking straight at an object and raising their heads. This enables the animal to see a far away predator or to focus on an obstacle.

When a horse uses binocular vision on something closer or down on the ground, he drops his nose and arches his neck while looking down. This helps to locate a threat such as a snake.

Posted by Christine Wright at 8:31 PM