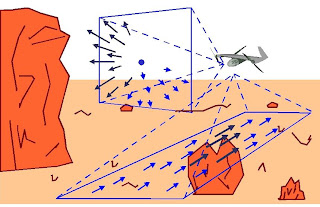 I have had an amazing opportunity to begin a journey of receiving my pilot's license. One of the most challenging parts of flying, besides the never ending checklist to prepare for flight, is landing. In order to make sure that the aircraft lands safely, the pilot must reduce the plane's altitude and speed, as well as touch down and come to a secure hault (Beall & Loomis, 1997). Even more difficult, is how the pilot must perfectly align the aircraft with the runway. Being that we live in a three dimensional world and move about in that way, most of our visually controlled locomotion depends on perceived distance (Beall et al., 1997). In the experiment by Andrew Beall and Jack Loomis (1997), they attempted to prove that optic flow is what is important in controlling locomotion vision and distance. Optic flow is the pattern of movement in surfaces and objects (Centeye, 2010). According to the article published by Centeye (2010), with optic flow, one is able to perceive motion through the observer's movement. When moving forward, either by walking, driving or flying, objects around the observer appear to move backwards. Distance is able to be perceived by optic flow, from the objects around the observer. Farther objects will appear moving very slowly or not at all, while closer objects will appear to be moving faster. The focus of expansion, or the point infront of the oberserver, will not move at all. This point will, however, become larger, as the observer moves closer. This focus also tells the observer in which direction they are moving. The same event takes place in aviation. In the research by Beall and Loomis (1997), as the airplane becomes aligned with the runway, flow is then created from the movement and the focus of expansion. Optic flow takes part in everyday life and can be especially interesting when in flight.

Centeye. (2010). What is optical flow? Retrieved from http://www.centeye.com/pages/techres/opticflow.html
Posted by ddv at 6:43 AM