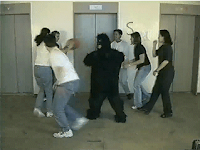 Are you guilty of "Inattentional Blindness?" Watch the video below and find out!

DID YOU SEE THE BEAR?

The first time I watched the above video, I never noticed the "moonwalking bear"since my attention was focused on getting the correct number of passes for the team in white. If you also did not notice the "moonwalking bear" then you were guilty of Inattentional Blindness. Inattentional Blindness is defined as "the failure to perceive a stimulus that isn't attended, even if it is in full view."

This video is a re-creation of the researchers Daniel Simons and Christopher Chabris, "Gorilla Experiment." Simons and Chabris created a seventy-five second film that portrayed two teams, one team dressed in white and the other dressed in black playing basketball. Participants were asked to count the number of passes for a certain team; therefore, a task that focused their attention on the white team only. Conversely, observers were not focusing their attention upon the team in black; and therefore were not able to detect the unusual stimuli in the experiment; in this video the unusual stimuli would be the "moonwalking bear." Simons and Chabris both decided that after forty-five seconds into the basketball game; either a woman carrying an umbrella or a person dressed in a gorilla suit would walk through the "game," an event lasting between three to six seconds.

Simons and Chabris reported that after observers watched the video, 46% of participants failed to report the woman or the gorilla; they stated that they saw nothing unusual happen in the basketball game. In another experiment, Simons and Chabris conducted the same method of study, however, they had the gorilla stop in the middle of action, turn to face the camera, and pound its chest, yet half of the observers STILL failed to report they saw the gorilla!

As a result, these studies have demonstrated and proven that when observers are attending to one sequence of events, they can fail to notice another event, even when it is right in front of them! This could be the reason that we also have so many motor vehicle accidents, because drivers are focusing their attention on texting on their cellphone, applying their makeup, or talking on the phone. Therefore, since the driver failed to focus their attention on the stimuli on the road (walkers, drivers, cyclists) an accident is at a greater risk of happening!

This has made me become more aware and conscious of my surroundings; because I may be missing an important part of the "picture."

Posted by Nicole DelCorio at 1:01 PM