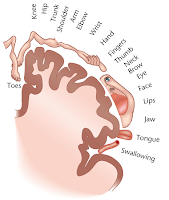 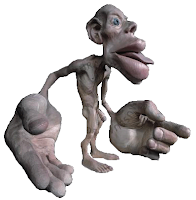 I thought that it was interesting learning that there is a map of the body on the cortex. I never knew that there was an organized map of the somatosensory cortex that represented locations on the body. This information was discovered by Wilder Penfield in 1950 while he was operating on a patient to relieve symptoms of epilepsy. Penfield would stimulate certain areas of S1 and S2 and the patient reported feeling sensations in different parts of their body.

After Penfield did further testing he found that sections of S1 and S2 were similiar to the body parts, and it apeared similar to an upside down person. The resulting map was called a homunculus or "little man". However, it seems that certain areas which were more important or sensitive to touch were larger. For example the hands and lips were much larger than other corresponding body parts.

Further research has been also done which has shown that the brain can show certain types of plasticity.Certain sections of the homunculus can become larger when the corresponding body part is used more than normal, this is called experience-dependent plasticity.