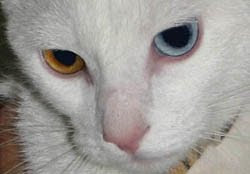 Cats are very active creatures and often wonder how their works. I own a cat and I notice he is able to see things easily at night and he sees things that are not there well at least things we can't see. I looked into a cat's vision and I found out cats vision are actually different than what we know.
Cat eyes are sensitive to light because their pupils begin to dilate but their pupil dilate to where it is big and round or it dilates to a vertical slit. When the cat’s pupil gets much larger than your pupil can, it lets in more light, but it does so at the expense of good depth of field (the distance over which objects can be put into clear focus). When the cat’s pupil contracts, it doesn’t stay round as a person’s does, but becomes a vertical slit. The Cat's slit pupils are for them to be active in both day and night and their advantage is that they can cover a great range of sizes, getting much smaller, much faster, than can a round pupil. Although they can see good at night their disadvantage is that when they are in their slit formation, they create optical interference that makes perfect focus difficult.
A cat’s lens is much larger than the human lens, which lets the lens be able to gather more light. But their disadvantage is while the small human lens can change shape to focus light over a great range of distances, the cat lens can hardly change its shape at all. Since they can't change their lenses cats have difficulty focusing on objects very close to them.
In the cat's retina it is important how well the cats see the image focus and this is determined by the strength of the lens. The lens strength is important for the distance to the retina because cats can neither be near sighted or far sighted. The farther the retina is the larger the size is of the retina. In human vision, humans have a cone-rich retina, and even have an area in the center of the visual field made up of only cones, Cats have a rod-rich retina and no cone-only area.
Cats have poor detail vision compared to humans and because cones are also responsible for color vision. Cats do have poor color vision but they’re not colorblind. They actually have the same type of color vision as people who are colorblind: a type of red-green colorblindness termed deuteranopia. They can see blue versus other color fine, but tend to confuse colors on the red through brown through green continuum.
A Cats night vision is better than their day vision. The level of retina illumination is about five times higher in a cat’s eye than in humans and all those rods pooling signals from minute amounts of light allow the cat to pick up the faintest light source. Nonetheless, some light still manages to pass between the rods and cones. Instead of letting it be absorbed at the back of the eye, as the human eye does, the cat has a structure called the tape tum lucid um that reflects light back to the receptors for a second chance to create a signal. The eye shine you see when you shine a light at a cat in the dark is the reflected light that has managed to elude the receptors in both directions and is bouncing back to you from the tape tum. The end result is that cats can see light at eight times dimmer illumination.
I tested out my cats vision, when I shined a light to my cat his pupils went from big black circles to verticle slits in seconds. I also tested his night vision. I threw a toy down the stairs while it was pitch black and he found it and brought up stair in his mouth of course he ran under the bed with it but he actually was able to see where the toy landed and what it was.
Posted by JulieA at 6:31 PM