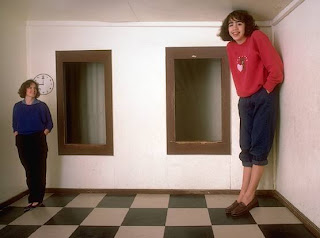 Take a second and look at the two women in the picture. What woman in the picture to the left seems like a giant? If you said the woman in the red sweater you are INCORRECT! The two women are actually the same height! Your brain has just demonstrated the difficulty we have perceiving "Illusions of Size."
Have you ever wondered how magicians have the ability to trick our minds into seeing something in a particular way? Have you ever asked yourself; "How did that magician just do that?" It all has to deal with how our brain interprets the connection between the perception of size and the perception of depth!

The picture above is a visual demonstration of "The Ames Room." You can speculate that the woman on the left seems much smaller than the woman on the right. This perception occurs even though both woman are the same height. You may be asking yourself, "How can that be, they are standing in an ordinary constructed room?" Wrong. The reason for your visual error lies within the construction of the room. The shapes of the walls, and the windows at the rear of the room make it look normal when viewed from a certain observation point; conversely, the Ames Room is "actually shaped so that the left corner of the room is almost twice as far from the observer at the right corner."

The Ames Room actually seems like you're walking through a "Fun House"with all those mirrors that make your body seem distorted. Therefore, the construction of the Ames Room allows for the woman in blue to have a much smaller visual angle than the woman in the red sweater. Hence, the woman in blue is actually almost TWICE as far away from the woman in red! In order for the room to look normal at our viewpoint, the left side of the room must be enlarged.

The explanation for the Ames Room is not just solely based on Size-Distance Scaling ( S = R x D) it also relies on relative size. This states that our perception of the two women is "determined by how the fill the distance between the bottom and top of the room." Thus, the woman in red(right) seems much taller because she fills the entire space; whereas the woman on the left occupies only a little of it, we perceive the woman on the right taller. Pretty neat, right?

The video below is very detailed in that it explains all the misconceptions we have about this "normal" room and why! So, next time you visit a Museum or even a "Fun House" on the boardwalk, remember it all deals with our perception of size and depth! Enjoy the following video:

Posted by Nicole DelCorio at 6:41 PM